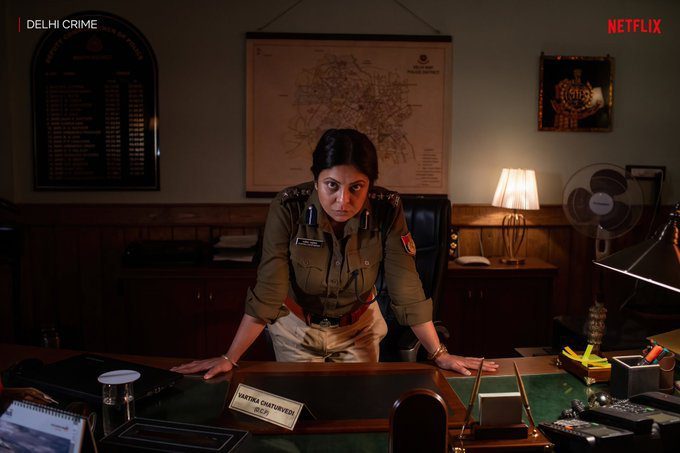 When I first saw  the second season of Delhi  Crime  my initial  reaction was relief. Thank God, the second season turned  out to be  as  gripping,  if not  more than the  first season.  The characters from the  Delhi  Police are  now etched  as   the DPs  of our collective imagination. Vartika Chaturvedi, Neeti Singh, Bhupendra Singh, Subhash Gupta, Jairaj  and the rest of the force are  characters  we all  know well by now,  and  admire for being so dedicated to their  work it almost seems  as  if we are  looking at the other side of the much-maligned  police force’s image.

Rest assured,  neither  the first season nor the second is   a police procedural  designed to whitewash the  police force. The  plot on this occasion  has no room for  negotiating with propaganda . The five episodes are edited down  to a lean lithe lissom  litany of crime and  punishment, designed with the  rare care  of  a work of art….Or perhaps ‘art’ is  too escapist a concept for something  as  authentic as  this.

This time the  razor-sharp squad is alerted to  a series of grisly murder of  affluent senior citizens all across Delhi. Murder is  not a pretty sight. The camera spares  us none of  the  ugliness  of the crime.  Shot in  dark spaces  there is  a commendable  vividness even  on the small screen. I wonder what this  series would  look like on  the  big screen!

Straightaway without much ado, we are swept into a world very different and  far removed  from the  real-life Nirbhaya episode  of the first season. This is  different universe  of  twisted  minds  and  Tilottama Shome as  a  criminal  mastermind  knocks  us senseless with  terrifying temerity.She is  frightening in  her consumerist  greed.

In the last two episodes the narrative becomes  a cat-and-mouse between the two brilliant  actresses  cop Shefali Shah  and the criminal Tilottama Shome,  not in the crude cinematic sense. The game is  much more cerebral .

These  are not ordinary times, and this is  not an  ordinary police  procedural.The writers  Mayank Tewari, Shubhra Swarup, Vidit Tripathi, Ensia Mirza have woven a  plot that is not designed  to impress us with  technical details. Nor does the  storytelling  tilt the  other way to  expose  the emotional underbelly of  the criminal  procedure.

Like Season 1, Season 2  Of Delhi Crimes hovers  somewhere between  the tone of straightforward documentary and a dreamy borderline hallucinatory world  of Kafkaesque absolution.David Bolen’s cinematography captures this  dual-dimensional world  with austere vividness.

As  for the  performances how do I  mention a few  actors when each in even the  smallest role is  so brilliant? It is  all  about team work. This,we learnt from Vartika Chaturvedi.  Take  a bow , lady. You  killed it.