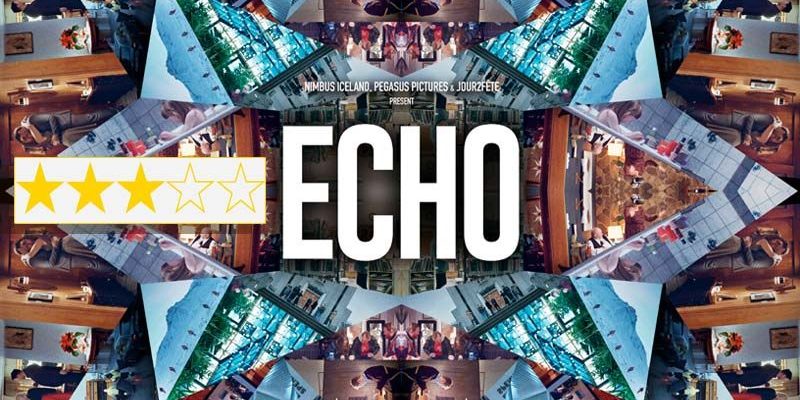 Echo Review: Seek  this one out  the soonest,  if you are fan of unorthodox cinema.  Films that dare to  push the envelope  so  far the narrative  topples  over   the  precipice  into  the abyss where  we the audience are supposed to  look for meanings that do not make themselves evident immediately.

For  example, why is  Echo , the Icelandic masterpiece by Runar Runarsson/ shaped  like  a shapeless souvenir , the one that  won’t fit on your  mantelpiece.  Dammit , it won’t even stand steady  on the surface.

As  we grope for some semblance of  a  centre to the  goings on   in Echo it becomes clearer than ever this  is a celebration of  the opposite  of integration. 56  stories, 79  minutes. That’s what we have. During those episodic minutes of  this  precious  film’s playing -time  characters come for barely  a few minutes, sometimes less.

They  all have a  story to tell. But we can  only imagine  what they are  letting us  into. There is no explanation for what they are doing and why. It is  Chrismas eve in Iceland  , and the atmosphere  is  snowed under revelry and tension. Director Rúnar Rúnarsson  takes us through  56 vignettes, fleeting shots into  multiple  lives as seen through the window  of a speeding train. I  felt like the alcoholic  in The Girl On The Train, peeping  into  an apartment as the train passes  by,  imagining what must be going on with the people we barely see from that distance.Are they happy?  Not particularly . Are they sad? Not permanently.

To be honest I can’t even  remember all the  snapshots that constitute  this astonishingly freewheeling cinema  of   enormous eccentricity. The  vignettes  that  left the deepest impression are  the one  where two  very  kind socialworkers  make  a drugaddict’s  Christmas a happy one with a gift, and a little girl who  plans a  piano  recital  as  a gift to her  father  only to be upstaged by  his  daughter from  another marriage.

Though the  plot lines are  slight the  sound  of  the  breaking heart is heard loud and clear. Parents  and children  try to find a common  ground, office goers who can’t get away  from Christmas  miss their family… through all of this I looked for a common link. There are none.

Echo simply moves on , from one vignette  to another, emplying a technique  of  storytelling that is at once  exasperating and  fascinating. The  former  for its lack of  steady storytelling. The latter  for that very reason.You may not come away  from Echo with much of a story to tell. Buy you will definitely wonder what that was all about.