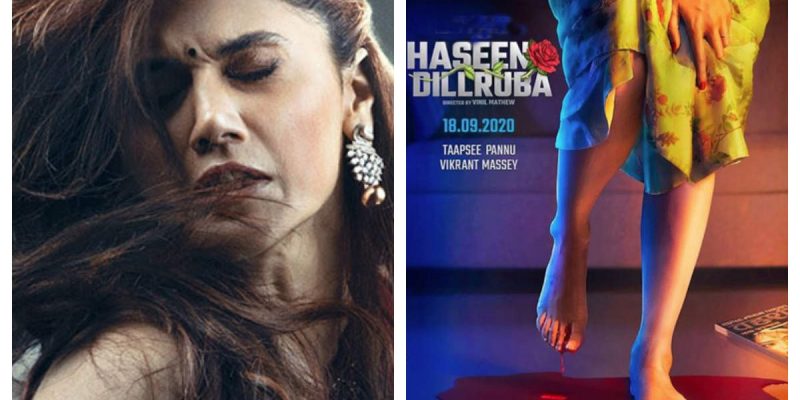 Without resorting to  double  meaning dialogues  and  any skin show, Taapsee Pannu  in  the trailer of Haseen Dillruba  succeeds in portraying wantonness  better than  anything Bindu  or  Padma Khanna  ever did in their  hate-days. The  difference  is, Tapsee is  the heroine of the show.Which  makes  the  moral compass  of  the  cinematic hero/heroine  move a  full  360 degrees.

The  trailer  of Haseen Dillruba(strangely  director Vinyl Mathews’  first film was titled Hasee Toh Phasee, will the third be Haseena Jo Kabhi Phasee Naa?) is  deliberately kitschy  and pulpy , like those novels on railway stations in the1970s.

Taapsee’ s  Rani seems  to be  a fan of one such pulp  writer named Dinesh Pandit.Is he modeled   on Gulshan Nanda?  She  is  a travesty,  a non-conformist  wife and a middle-finger daughter-in-law who seems  to have bumped off her angelic(read: boring)   husband (Vikrant  Massey) for a  roaring affair  with  the  town’s stud(Harshvardhan Rane).

Yup, this  woman has  a strong appetite for  adventure ,sex, infidelity  and  murder(not  necessarily in that  order).And she isn’t afraid to display her appetite , no matter  how  sleazy it makes  her look.Just where the  plot takes  her lust for life remains to be seen.

Says Taapsee Pannu,  “Haseen Dillruba was a film I had a very strong gut feeling about the day I heard the basic idea from Kanika. Unfortunately I wasn’t the first choice for the film and it came to me after all their options were exhausted. And the good old saying that, if it’s meant for you it will come to you stands true for this case. It’s not just a beautifully written mystery, it has such wonderful characters involved which is candy in an actor’s hands. I am glad I got to experiment with my look and performance with this one because I am definitely not the go to person for this kind of character conventionally and we all love to take risks here.”

Vikrant Massey adds, “Haseen Dillruba is the perfect mix of humour, quirk, revenge and romance. I hope it surprises the audience as much as it surprised me when I heard it first. It was an enthralling experience shooting for it. Let us all watch the mysteries unravel itself and learn important life lessons from our beloved Pandit Ji.”

Harshvardhan  Rane  who plays Taapsee’s lust interest is  happy to be in the  film. “I am honoured to be in the same frame with some of our country’s finest talent. Taapsee and Vikrant, have one thing in common I could never make out if they were joking or if they were serious. I always had to look for tiny nuances to understand the pretext. Working on Haseen Dillruba also gave me a chance to associate with the best film makers, be it Aanand L Rai sir, Vinil sir and Kanika ma’am. I was blown away with the script, a classic whodunit that will keep you guessing until the very end.”