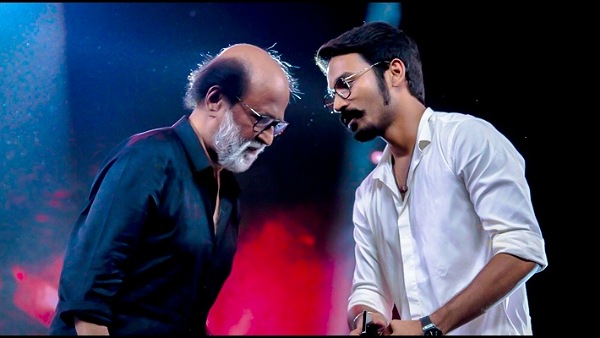 By announcing his separation  from his wife Aishwarya of 18 years , actor Dhanush has risked the  wrath  of  Rajinikanth’s fan-dom. This could mean  all of Tamil Nadu, give or take a  few pockets where Dhanush’s attempts to do an anti-Rajinikanth(“I never wanted to  be  known as a superstar”) impressed  an elite audience.

Hours  after Dhanush and his  wife  Aishwarya  announced  the end of their marriage, I was on the phone with a major Tamil actor  who placed  the  blame  on the breached marriage squarely on Dhanush.

“This  is not a bolt  from the  blue  like  Samantha and Naga Chaitanya calling off their marriage. No  one , not even their  cloest friends or even  the  couple’s parents, had seen  that one  coming This is  different. Rajini’s   fan clubs  won’t like it,” the  actor whispered  into my burning ears.

Rajinikanth’s  daughters  did not marry  into happily-ever-after  partnerships. The  impending  separation  was killing Rajinikanth  for years. When  his  younger daughter  Soundarya  separated  from her  (first) husband Rajinikant  was shattered. He pleaded  with  his elder daughter Aishwarya to  call off the  plans to  call off her marriage, if not for the sake of his, Rajinikanth’s   image, then for their two sons who are still young. Yatra is  16  and  Linga  is   12. If I was their  parent I’d keep them  away from school  for at  least the next  one month.

Sources in the know  tell me , Aishwarya tried hard  to keep  the marriage  going.She  continued  to ignore  Dhanush’s rumoured  adventures  outside marriage , as most  wives in the  Indian  entertainment industry do.

I have no clue why  this couple  decided  to call it quits at this point of  time.As  my Tamil  actor-friend, himself  quite  a known player  in the Raas Leela  of  the  Tamil film industry,  snidely suggested, “Maybe Aishwarya  wants to  re-marry, as  she  has  every right to. It can’t be Dhanush. He  will  never  marry again’ He doesn’t need  to.”

No one who knows anything about  the Tamil film industry is  anywhere  even remotely shocked  . This  separation  was  coming  for a long time.  Dhanush and Aishwarya  were  heading in opposite directions for a while.

In  2012  I remember  Aishwarya  Rajnikant Dhanush(as she called herself) directed a fascinating Tamil thriller called  3. It  was an  out-of-the-box experimental film that attained pre-release fame  through Dhanush absurdist  song  Kolaveri D. In hindsight the  song’s success  was not only deservingly short-lived but also  thoroughly embarrassing for all  concerned . Worse of all it eclipsed the merits  of Aishwarya’s film.

If  the  KOLAVERI DI lyrics were  a hotchpotch mix of English and Tamil, the singing style didn’t conform to any particular style and it was sung by a non-singer — despite all that, it became a super hit.Dhanush, who lent his voice to it, says his lack of comfort with the English language helped him in choosing the words to connect with people who are not fluent in the language.

Also Read:  Alia Bhatt Walks Out Of NTR Jr’s Next

Said Dhanush, “It’s just a song. Just a phase. It will pass. I am one of those people, who don’t know how to speak proper English. But I manage. Speaking English language was initially a huge problem for me, so I knew how to connect with people like me. I knew what words to choose so that they connect with people, who are not fluent in English.”

The song, composed by  Anirudh Ravichander, was  a part of  Dhanush’s wife Aishwarya’s  directorial debut  3. Dhanush had no illusions about the quality of the lyrics. “It’s not poetry. Whatever silly words came to my mind, I used it in the song. It’s just like any composition, nothing special. A group of us GenNext kids —me, Shruti Haasan, my wife Aishwarya and the composer Anirudh — were open to ideas.The tune was done in 20 minutes. As soon as I heard the song, the words simply came to my mind spontaneously. I wanted the words to be understood by everybody regardless of whether they know English or not,” he added.

The  actor admitted  to me   that the song had  overshadowed  his wife’s film. “It seems the song has become bigger than the film. But the film has a solid and novel script. Once people see the film they’ll see the song as just a part of the narration.Now I’m just going to focus on shooting the song for my wife’s film. Let’s see where it goes from there.”

3  released, bombed and there were whispers   in the   film industry  that Rajnikanth had to pay off some  of the debts.

Dhanush angrily responded  to this rumour, “How I love the stories that are created just because I am married to a particular person’s daughter.’3′ has suffered no losses. And even if there are losses to be compensated for, God has been kind to me. I can take care of my own financial liabilities, thank you very much.”

This was   10 years ago  during a time  when no one imagined  Rajinkanth’s  daughters  would both end their marriages. One  of them has  found love again. One hopes the same  for the other.One  also  hopes that Rajnikanth  doesn’t take  his daughter’s heartbreak to  heart. If anything  were  to  happen to  his  former father-in-law things may get uncomfortable  for  Dhanush.