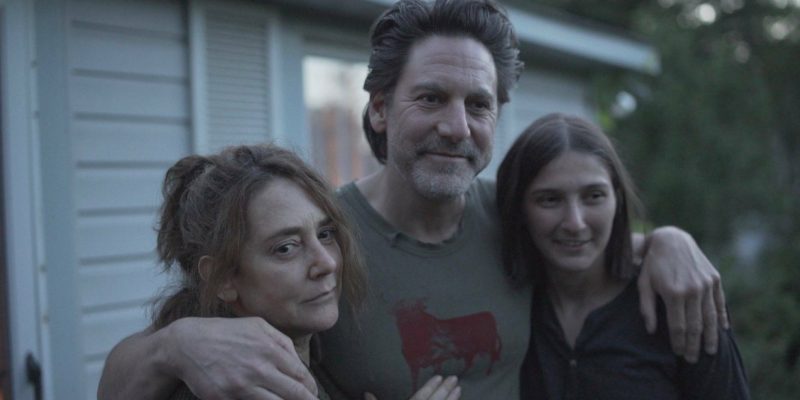 This undiscovered  gem on  marital discord doesn’t introduce  us  to the characters the way  clever  movies do. You  know, like  someone says, “Hey you can’t  do that you are my sister!’ to let us know  the identity of  the  guy who has just entered  the plot. None of  that spoonfeeding happens  in  Hillary  Brougher’s  premier stab at  at a feature-length  film.No self-pity for the wronged. No  atonement for the  guilty.

The  characters  and their  dilemma creep up on you the way life  usually does. Without  warning. And you are left   threshing around in the deep murky waters hoping the tide would take you to the shore.

Nothing  is  for sure  in  South Mountain. When we meet  Lila played by the  brilliant Talia Balsam,she  is busy entertaining family and friends in their  idyllic home in the Catskill Mountains(NY). She  doesn’t know why her husband Edgar has locked himself  in  one  of the rooms while  guests swarm  the couple’s home.

Edgar  is watching a woman on his phone giving birth to a baby. His baby. Big problem ahead for Lila. Writer-director  Hillary  Brougher  doesn’t punctuate  the drama with  the  sound  of  rolling thunder  and  background music.  The  crisis  is  handled with  restrain and normalcy even as it deepens.

As in most films about a fractured  marriage it  is  the wife   who remains  the  focus of attention. As Lila  struggling with  contrasting emotions of rage,  frustration,bitterness and  forgiveness  Talia Balsam  gives  a performance which needs no  external props,  no  music  or  sympathetic  friends  and relatives  to   let us know the  the swirling inner turmoil  of a woman who has  just been  told  that her world has collapsed.

Lila  keeps her panic in check, not because there are children and friends listening in but because there is  no  bandwidth  for selfpity in her  consciousness.The  most savagely  funny  sequence  has Lila mix  ground sleeping tablets  into her husband’s  cake that she  bakes for  him. As soon as he takes  a bite she  changes her mind. I  found this  response to her  craving for revenge  way too  ‘Big Litte Lies’  specially since her husband   Edgar(played with  a  balanced sense  of guilt and determination by Scott Cohen) is no cad.

South Mountain left  me with a  deep sense of sadness . What it tells us about a ruptured relationship  is that one of the  two parties can opt out. But it  doesn’t mean the  other  party stops  loving and caring. It’s a dreadful situation to be in. South Mountain doesn’t dramatize Lila’s sense  of betrayal. It normalizes her hurt.And that hurts  the  most.

Also Read:  Narappa Review: It Is Powerful, Disturbing, But Kitschy