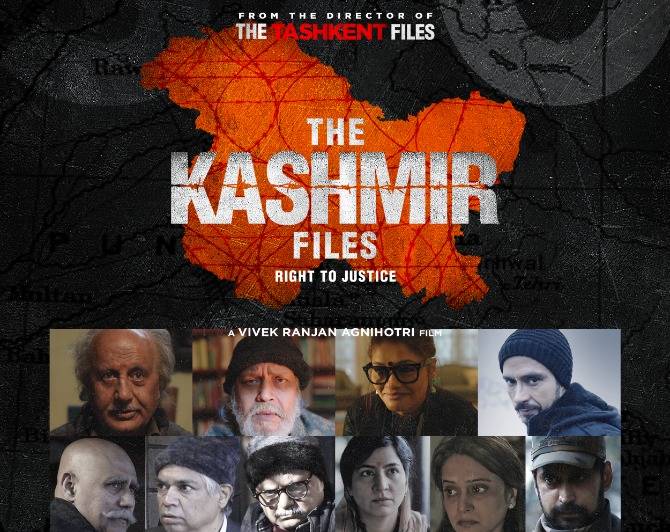 The  Kashmir Files  hits home. It in an angry indignant film, sometimes  choking on  its own bile  while  going that  extra  mile to  target the  vile, at other  times failing to  differentiate historical fact from the dramatic interpretation of it(more about that  later).

It’s impossible  to tell  what Agnihotri is  more angry about:  the actual genocide(genocide, not exodus , we are  told repeatedly)  or the  whitewashing-subversion  of  it by the architects  of Indian  history.

Why is it that  so much literature is  available on  the Jew  holocaust and  not  the Kashmiri Pandits’ genocide?  Director  Vivek Agnihotri loves a  solid conspiracy  theory. He sank  his teeth  in one  earlier in The Taskent  Files, purporting to solve the mystery of the sudden death of Lal Bahadur Shastri during a  visit to Taskent.

That  film was   the sleeper  hit  of 2019.To call  The  Kashmir Files  sleeper  hit would be inappropriate, politically and otherwise. The  growing impact  of  the  film  indicates a  movement rather than a freak occurrence. The  narrative  moving back and forth in  a heaving  lurching motion leaves  us ‘see’ sick.

Besides  this  film is  too mucha wakeup call  to be a ‘sleeper’ or otherwise.

Agnihotri spares  us  none  of  the  brutality that the  Pandits faced as  they were told to vacate their  homes overnight. Convert, Die  or Leave   became  the slogan for the  pandemic pre-planned pogrom. What the  militants’ massacre aimed at  was  no less than  a cultural  cleansing. Another  slogan , heard repeatedly in the deafeningly defiant  drama is , ‘Without Hindu Men, With  Hindu Women’ which sorrily meant that the  bestial jihadis  wanted to kill the males and impregnate  the women.

It’s  a vile  deplorable   thought, which any rational mind would reject. Agnihotri  recreates the sheer  madness and  monstrosity of that period ,not letting go of a  single  opportunity  to use  the  sledgehammer effect.

In one early sequence a little  girl hands over a  rose  to  an  Indian army officer who , seconds  later  is ambushed and  gunned down  by  bike-ridden  assassins . Yes, the shock  value is  much valued  here. So  I quickly take you  to the  climactic butchery where  21 Pandits are  shot at pointblank in the centre  of their  foreheads one  after another.

But my question to Agnihotri is :why the  numbers? Why is the narrative  so taken up with  how many were  massacred? If you repudiate  the  statistics  put out by  the  Government  on  how few  were  killed, then your ‘authentic’ numbers  too are  open to debate.

The  Kashmir Files would  have worked better  if it had steered away from  inducing horror and  disgust through numbers. The  idea  that the film puts forward—of an entire creed being annihilated  by fundamentalists—is so crushing in  its implications that numbers  cease  to matter.

What  really counts is  the impressive credibility Agnihotri brings to the polemical drama.

There are   long  passages  of history-deconstructing   conversations on the  genocide among four  old friends played  by  Mithun Chakraborty, Prakash Belawadi, Puneet Issar and  Atul Shrivastava,the last-named   latter embodying the  ‘press-titute’ line  of  thought so  popular among a section of the Indian right-wingers who  conveniently  pin the blame  for historical disinformation on  the media.

These closed-door conversations confer an  aura of a chamber-piece  on  Agnihotri’s  conversational  Kashmiri carpe-diem.It’s only when the narrative steps  out into the action that we  feel the full impact of the  seething rage  that runs through the  narrative’s vital  organs. Anupam Kher, dramatically effective as  a senile Kashmiri pandit who dies fighting for his people’s right to  return home,has  a very moving moment when he  sits nibbling on a biscuit outside his  tent at a refugee camp while in the distance  we hear  the  voice of an old woman singing a Kashmiri song about homsickness.I wish there were more such reined-in moments of anguish.

Pallavi Joshi as  a rabblerousing  academic  inciting notions of azaadi in her  brainwashed students is deliciously  ambivalent. But it is Darshan  Kumar as  a young impressionable third-generation  Kashmiri pandit who steals the show. His pitch-perfect monologue on the  illustrious history  of  Kashniri pundits at the  JNU, sorry, MNU, will be recalled by history.

I am  not too sure how  how history will judge The  Kashmir Files. It will depend on who  is in power on  judgement day.

Rekha Is An Alia Bhatt Fan