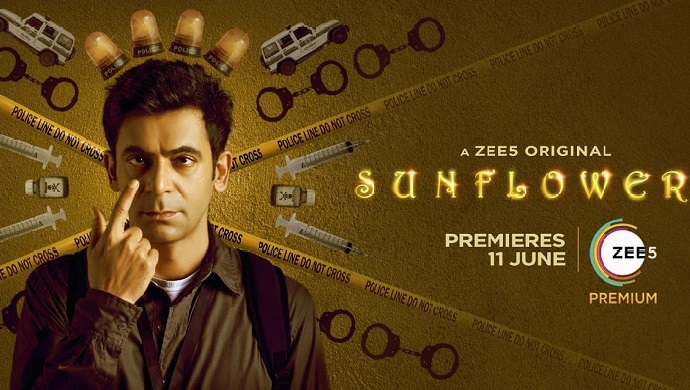 Sunflower gives  the talented stand-up comic Sunil Grover  a rare chance to  captain the ship.Alas, a sinking one!Sunflower  comes  to us  as a “murder mystery”. But there is  no mystery about this whodunit! In the  opening  sequence of  the  first episode which begins with a  stylish shot  of naiyalpani-wallah cycling purposefully  to an apartment  complex called Sunflower with a delivery order. Within the next few minutes, a resident named Raj Kapoor  is  murdered.The culprit’s identity  is revealed. No, it’s not Dilip Kumar.

So what  happens in the  next  8 episodes?  I will let you know  as  soon as  I  figure it out.  There are  cops  all over the building looking for the culprit (who hides behind his wife’s pallu and cowers and glowers, depending on the  hour  of  the day).  The  ever-dependable Ranveer Shorey and Girish Kulkarni  are  the cops on  duty. Ranveer never smiles.  If the camera caught him  doing so even once in the  8 episodes, I missed it.Not much is known  about  Shorey’s character  except in one  episode where we see his wife  returning home late  after a film with friends.

Interesting characters show up  and  get  lost in  the jostling  melee  that the plot creates  without  being able to  make  an impression in the plot’s  perpetual  quest for  interesting asides.

Girish Kulkarni is the lech-cop. He has girlfriends all over the  city and it’s delightful the way this  chameleon can switch from benign  to slimeball from one yarn to  the next. One of my  favourite sequences  in this series is the one where  a 17-year old  boy  lectures  Kulkarni  on condoms in a  drugstore. I don’t know who that  boy is. But he steals the show from Kulkarni ,and that’s saying a lot.

There are spurts  of  wickedly funny writing all across the  8 episodes. Ashish Vidyarthi as the building society’s president  interviewing prospective tenants is  simply brilliant in his ill-concealed  bigotry.But this track, given  bewilderingly large space  in the plot, goes on and on.

Also Read:  Sameer Nair: "It has been a dramatic yet rewarding ride"

Wildly erratic,   sometimes  brilliant sometimes idiot,  the  plot  of Sunflower is  never  able to  explain  itself  completely to  the  viewers.

Anchoring the show, and  holding  together  its  sprawling loose ends is Sunil Grover, in what is  arguably his best  performance to date. Playing Sonu Singh, a sales executive in a cosmetic company , he is  a hopeless loser  but  never  one to give  up. This is what makes  Sonu so  interesting. Everyone except Sonu himself, can see he is  a  complete  wash-out  with no  prospects  of a bright future.

In one sequence  he is in the lift with his neighbour who promptly  invites the other girl in the lift for a party  and ignores  him. But the smile  never leaves Sonu’s face, no matter how  blatant  the insult, how devastating the  putdown.I wanted  to know more about this thick-skinned  optimist’s damaged past. The  script  sadly  does  precious little to  elaborate  on our protagonist’s back-story. It is  keener to juice the comic underbelly of Sonu’s loneliness than to show  him as a fleamarket version  of  Joaquin Phoenix in  Joker. So  lonely he  can  at any moment turn the  gun on himself or on civilization.

Grover’s Sonu Singh tethers brilliantly on the edge of  a nervous  breakdown, rescued from total collapse by his  astonishing  reserves of optimism. Sonu’s attempt to  befriend an over-friendly office colleague Aanchal(Saloni Singh, fabulous) which starts with a cake  and  ends predictably with an ache ,  could have been  the theme of  the whole series.

Towards the  end Sonu rescues   an old man(Sameer Kakkad ,still sozzled since Nukkad) from what looks  like either  severe acidity or  a heart attack.Sonu  is then kidnapped  by two Sardarji’s  and taken away to  Chandigarh.

Sunflower wants to  go into too many places too  many  times . The  end-result is a fidgety unmoored  series with a string of  loose ends and  a  whodunit with zero suspense. Sunil  Grover’s portrait  of  urban  loneliness, comic on  top so frightening underneath,   will draw you  into this  series.  Go at  your own  risk.